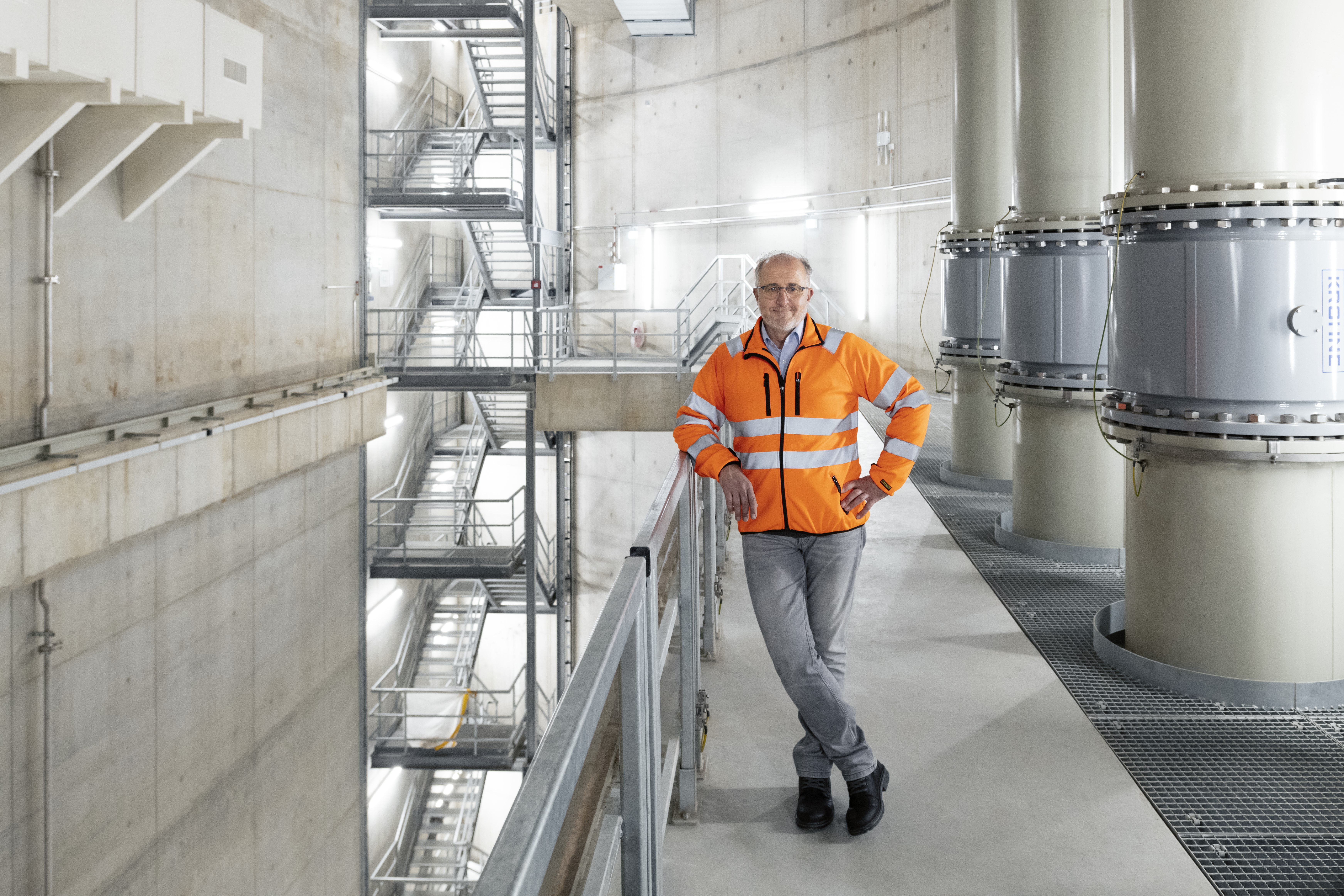 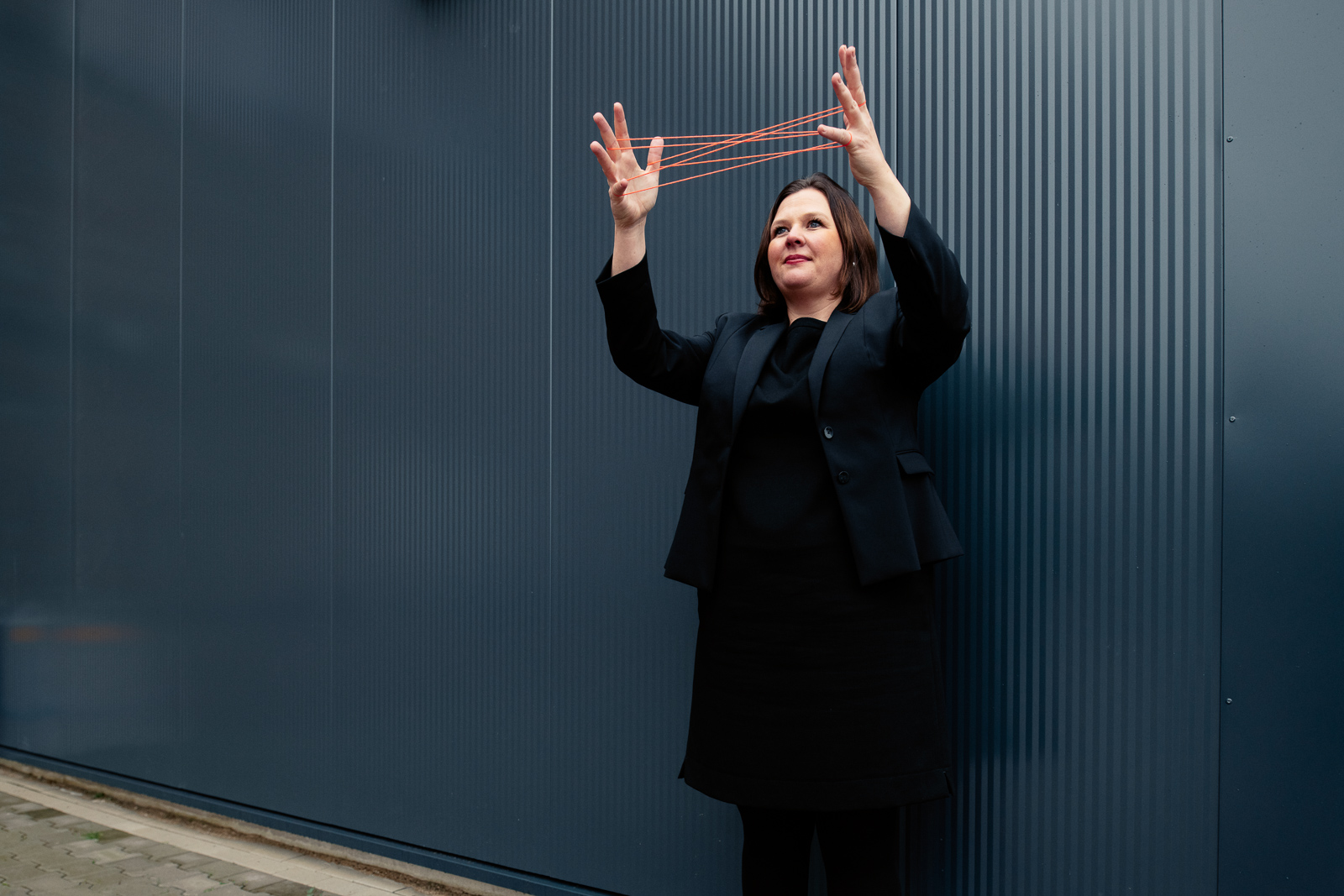 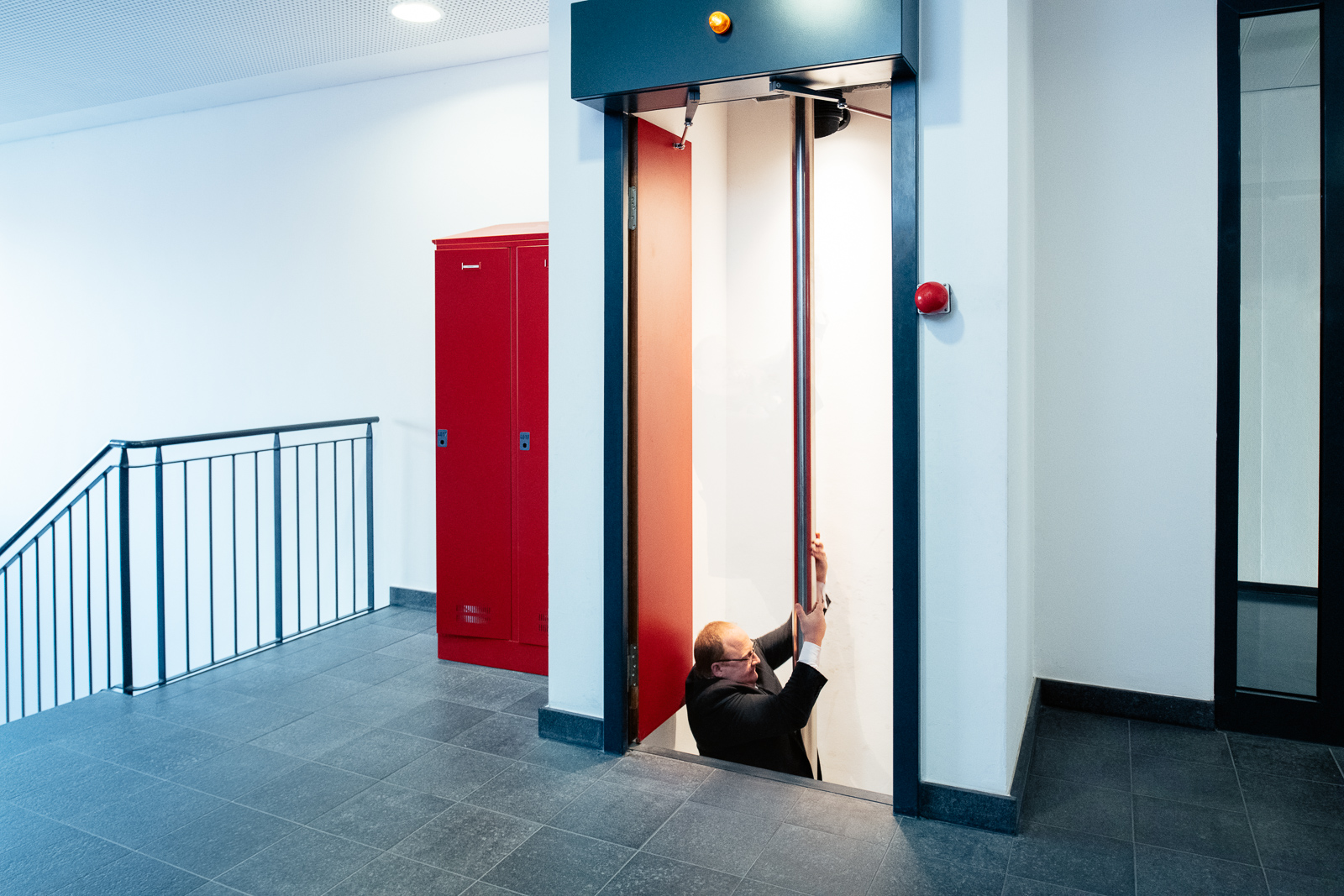 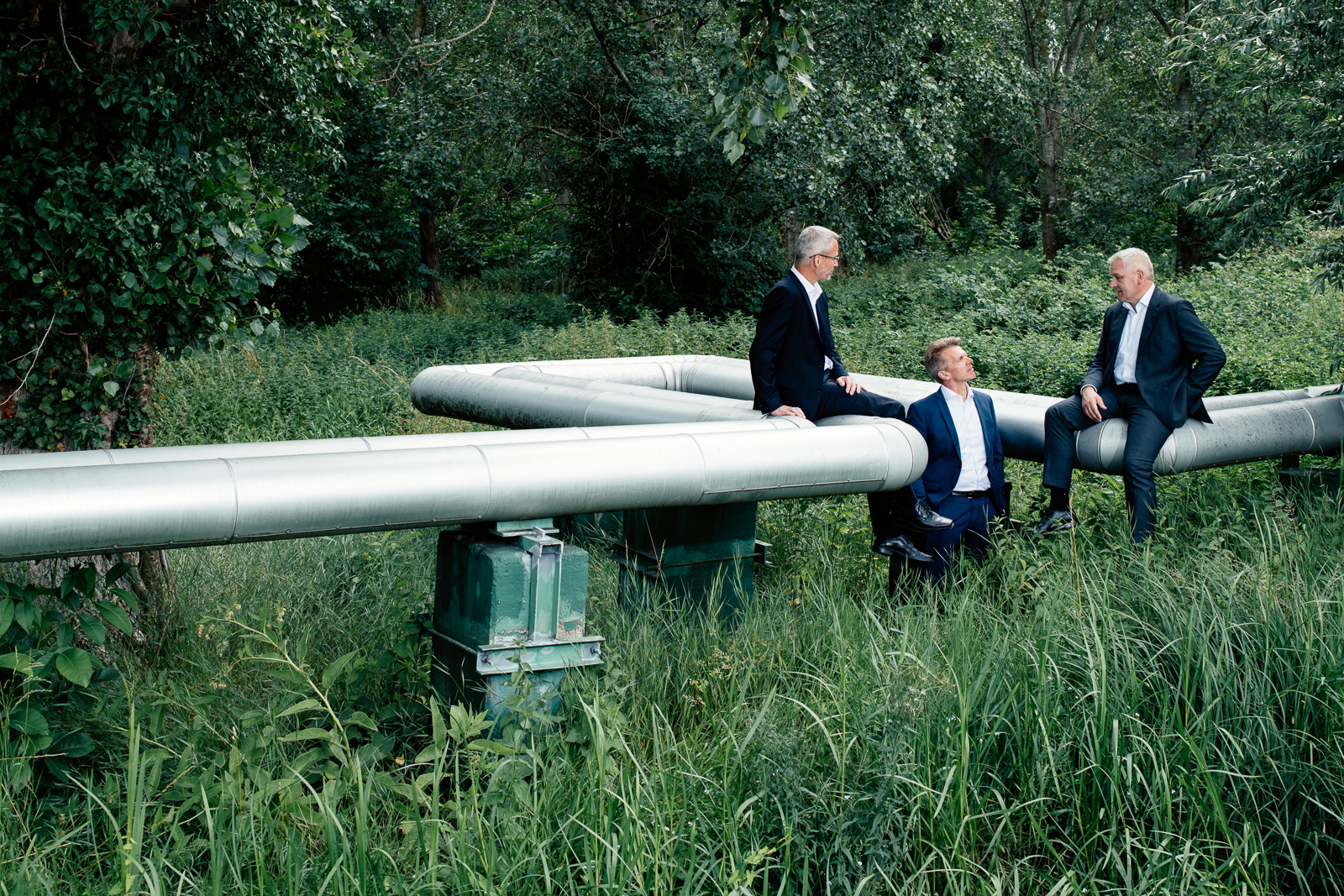 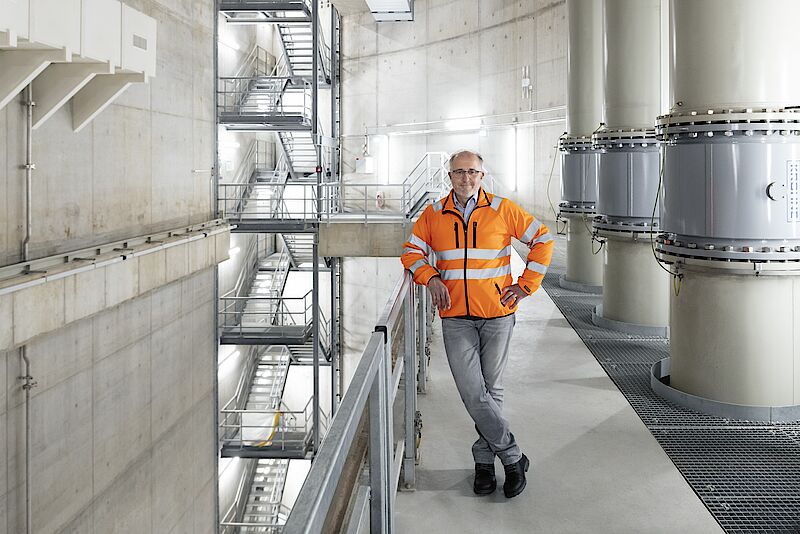 Now and for the first time in 170 years, the Emscher, the primary river in Germany’s largest conurbation, is entirely free of wastewater. As such, the main objective of the intergenerational Emscher Conversion project in the heart of the Ruhr region has been achieved. This development is attributable to Emschergenossenschaft as the responsible water board and to wide-ranging engineering services, many of which had to be rethought, researched and developed and which go far beyond merely water conservation.

Emschergenossenschaft was founded in 1899 as Germany’s first water board. It subsequently served as a model for an array of other water boards including Lippeverband, which was founded in 1926. From the outset, Emschergenossenschaft and Lippeverband have worked together under a joint umbrella (EGLV). As a self-governed public-sector entity, the organisation is supported and funded by its members – towns and cities, business and mining. It currently has a workforce of 1,800 working on a total of 782 km of waterways across an area of 4,145 km2.

More than a century ago, a sparsely populated agricultural landscape evolved into an industrial conurbation and the naturally flowing Emscher was turned into a man-made system of open wastewater canals. As mining dwindled, structural change set in and traditional heavy industry yielded, allowing wastewater to be carried away in enclosed underground sewers and the river with its tributaries to be turned back into near-natural waterways on the basis of innumerable carefully considered steps.

One of the world’s biggest restoration projects

The Emscher Conversion is playing its part in bringing water management experience together with the current requirements regarding the development of a sustainable region. Managing such a mammoth task calls for countless partners from all kinds of different fields who are often moving into new territory, who have the necessary expertise and who must merge these skills.

Johannes Siepenkötter and Reiner Tatus are project managers at Emschergenossenschaft and they are anything but out of their depth when it comes to structural, mechanical and electrical engineering. ‘Be it climate change, a changing energy market or wastewater treatment, modern-day water management has to come up with innovative solutions to a large number of challenges. There’s more to it than the obvious aspects all along the waterways – it’s also about wastewater heat utilisation, sewage sludge and ash management, phosphorus recycling, offsetting the fluctuations in other renewable energies with methane and hydrogen production, flood control and much more besides. Across the entire complex, the three major pumping stations along the Emscher wastewater canal in Gelsenkirchen, Bottrop and Oberhausen undoubtedly stand out – there were no models or experience reports on which to base them, but without them the primary objective of freeing the Emscher of wastewater could not have been achieved,’ explains Tatus, summarising his responsibilities.

The latter of the three pumping stations represented the greatest milestone along the road to achieving this objective. Wastewater arrives at the Oberhausen pumping station at a depth of approximately 38 metres and can be pumped around 42 metres up by as many as ten pumps simultaneously. All the incoming wastewater is pumped into overground pressure relief shafts, from where it flows a further 3.2 kilometres along the final stretch of the Emscher Wastewater Canal (AKE) to the Emscher estuary sewage treatment plant in Dinslaken. Without the technical excellence of the three major pumping stations, the canal would be far too low upon arrival there – approximately 75 metres below the surface.

The history of the Oberhausen pumping station’s construction began in 2016 with what was probably the largest hole in the Ruhr region – or at least the deepest earthwork site required for the Emscher Conversion. Below the surface, the facility is an impressive multi-level network consisting of 30,000 m3 of concrete, 3,500 m3 of reinforced concrete, a great deal of steel and seemingly never-ending stairways. All the way down at a depth of 40 metres is the facility’s centrepiece – ten huge centrifugal pumps, each with a maximum pumping volume of approximately 2,000 litres a second. These offset the wastewater’s natural gradient, enabling it to travel the distance from its source in the east of the Ruhr region via various sewage treatment plants and pumping stations, all the way to its final station – it will henceforth flow into the Rhine as clean water via the new Emscher estuary near Dinslaken and Voerde.

Surprisingly important – fire protection in the context of water conservation

The achievement behind these impressive figures becomes apparent if we take a closer look at a single element within the pumping station complex that is often initially somewhat overlooked, namely fire protection.

You could be forgiven for jocularly suggesting that, with so much water present, a fire would be extinguished in next to no time. But if given greater consideration and, moreover, if we take the strict structural engineering and building permission requirements that apply in Germany (and Europe) into account, we soon see that a lack of expertise here would be misguided. What’s more, incorporating a fire protection concept into construction planning early on allows for high time and cost savings as well as assured planning application and approval from the competent authorities and acceptance by the fire brigade, which has the ultimate say.

With projects on the scale of and as significant as the Emscher Conversion, unusual legal aspects can soon arise too, as planning approval procedures are selected which are unprecedented in law. With the project in question, a single application was required incorporating all the building regulation aspects of various building authorities, meaning the application consisted of several hundred folders. Here, a single planning error could soon result in considerable delays to the entire project. Finding a technical planner for fire protection at this point who has such a broad range of expertise that they can cover all the areas and disciplines of a technically sophisticated building complex is the first major hurdle to be overcome. Few specialist service providers know how to get all the requirements translated, transferred, checked and subsequently accepted following a cumulative approval. DMT is one of these rare companies and was therefore entrusted with the task of fire protection site management, providing general fire protection technical advice during the entire construction phase.

The standard approach to requesting tenders for and having construction work executed is to do it by technical discipline, starting essentially with the basic structural work, followed by mechanical engineering and then finally electrical engineering. Interface problems are inevitable here and uncompromising concept and planning implementation is required for vulnerability-free fire protection in particular. But during day-to-day construction work, there are often very practical questions that arise which can only be answered authoritatively by explosion and fire protection experts – there is otherwise a risk that the competent fire brigades and building authorities in the town/city in question will arrive at a different conclusion further down the line during the final inspection. What’s more, with such major projects, the risks are often at their greatest during the construction phase and therefore demand separate fire protection during construction that requires constant monitoring.

Here too, DMT served as a partner to Emschergenossenschaft’s project management team. In many respects, optimising achievement of the planned targets is not to be underestimated – if the building work is rigorously accompanied by and monitored on the basis of the high degree of fire protection expertise required, guarantee problems can be avoided by not allowing them to surface in the first place. ‘Hidden defects’ can be reduced to virtually zero on-site as part of the process. The issue of the rectification of defects – a point of discussion which is often time-consuming and bothersome for everyone involved and which can lead to costly delays – is practically eliminated. Even the building contractor’s risk, which is during the guarantee period as the companies performing the work may still suffer an insolvency at this time, meaning there is no responsible party to sue – is made more manageable.

The fire devil is often in the detail

Even if everyone involved has, from their professional perspective, done everything right, it is still possible that, for example, the wrong frame material results in the insulation system being breached, with pipes and electric cables which have already been laid then needing to be removed and completely replaced. In the second to worst case, the defect may only be noticed during the external experts’ fire protection acceptance inspection, resulting in very high costs and delays. And in the worst-case scenario, no one spots the defect until it presents itself as a tragic emergency.

Anyone who is familiar with the legal ins and outs of operator obligations will have a good idea of the seriousness of such an event. DMT’s fire protection experts therefore had a tricky preventative responsibility. Answers were needed to questions that had never arisen before: What flammable substances can be present in industrial wastewater? How does the extinguishing system get into every nook and cranny at a depth of 40 metres? How do you get the extinguishing gas used back out? What kind of fire risk do the technically advanced centrifugal pumps and electric motors developed specially for Oberhausen pose? At what temperatures does the wastewater-resistant polyethylene layer on the inside concrete surface display which chemical reactions? In an emergency, how do you guide the local fire brigade around the building complex efficiently? You can imagine how long the list of points to be clarified and then meticulously implemented is for a special industrial structure of this kind.

Before any technical facility can be activated, the construction work has to be accepted by the competent authorities and then definitively by the local fire brigade. What the fire brigade experts consider a fire protection solution can vary from place to place and they have in-depth expertise in this area. With its more than 100 years of fire protection experience, DMT is therefore the ideal port of call for everyone involved. And at the latest due to its affiliation with the TÜV NORD GROUP, non-expert decision makers are likewise happy to place their trust in the quality of DMT’s work and its results. A project manager who has gone through a final inspection with DMT at their side knows what the company means by placing an unpretentious value proposition alongside its logo: Engineering Performance – decisive added value for building contractors and plant operators.

The first preventative measure – talking to one another

The majority of project managers underestimate the full potential of modern explosion and fire protection services, from the concept and planning to construction execution and inspection, until they have spoken to DMT. So please do not hesitate to call us directly before submitting a planning application.

You can find more information on reliable fire protection on the website and under the links to the right. Or contact our expert Christian Chojnacki, official expert for Fire Protection, IT and Digitalization, +49 231 5333-380, enpe(at)dmt-group.LÖSCHEN.com.