Construction supervision by DMT since 2013

After around three months of tunnelling operation, the pipe jacking machine reached its target on the Meerbusch side of the Rhine on 11 May 2016. The German technology provider DMT, commissioned by the city of Düsseldorf, has been responsible for on-site construction supervision for the whole project since 2013. 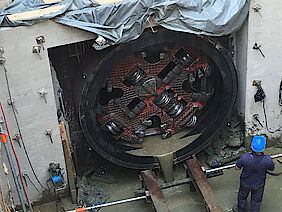 The city of Düsseldorf is building a second 1,000 meter long sewage culvert between its sewage treatment plant Klärwerk Nord in Ilverich on the left of the Rhine and Lohausen on the right. The new culvert is being constructed 25 meters downriver and parallel to the existing sewage tunnel, which also runs five meters below the Rhine riverbed from the Düsseldorf-Lohausen district to the Klärwerk Nord plant.

In preparation for the tunnelling work a launch shaft of approx. 25 m in depth was constructed using a reinforced slurry wall, and an approx. 15 m deep target shaft using a bored pile wall system. To create the tunnel, reinforced concrete pipes with an outer diameter of 2.4 meters were driven through the ground from one side of the Rhine to the other. Inlet structures will now be erected at the two connection points on the river banks, followed by renaturation measures to restore the greenery.

The project management of the Municipal Sewage Services of the City of Düsseldorf have expressed their thanks to all those involved in the project and in particular the construction supervision crew of DMT for achieving an important milestone in the implementation of this extremely technically demanding project.

DMT will continue to supervise the project and provide practical support until work has been completed.