Commissioned by the Czech energy company MND a. s., Essen based DMT GmbH & Co. KG has carried out seismic measurements in the southern Czech Republic close to the Austrian border. The purpose of the investigation was to detect oil and gas reserves at depths of between 800 and 4,500 metres. 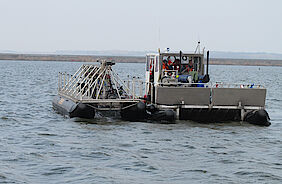 The survey covered an area of 227 km², including a 15 km² reservoir. Measurements were taken every 250 metres in 44 active lines, creating a total of approximately 12,000 channels in the field. Around 1,000 of these were underwater.

"With such a high number of active lines, this survey is one of a kind in Europe", explains DMT Project Manager Rüdiger Misiek. "But not only that, the conditions of the region were also a huge challenge for the whole team. Due to the mild winter, the wine makers were already going about their business, the hunting season was still in full swing and around the historical town of Mikulov, which lies in the survey area, there were a lot of tourists."

These challenges were something MND had in mind when choosing a contractor. "The area of 3D Waschberg is one of the most complicated for all kinds of operations, but DMT's seismic crew handled the permitting and field work with extreme care", confirmed Ivo Hen?l from the energy provider MND. "And despite the difficult prerequisites, the project was finished according to schedule and with excellent results."

The measurement data collected will now undergo special processing and be evaluated by the customer.