In honour of Global Surveyor's Day, an initiative of the Council of European Geodetic Surveyors (CLGE) and the National Society of Professional Surveyors (NSPS) to globally recognise the surveying industry for helping to shape the world as we know it, we asked two members of DMT's surveying team to share their thoughts on this fascinating and diverse field. In this short article Dr. Karsten Zimmermann, Deputy Head of DMT's business segment Engineering Surveying and Geomonitoring, and Benedikt Wolters, Project Manager, talk about the past, present and future of surveying. 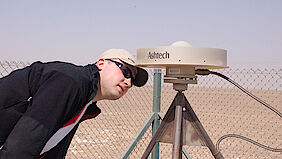 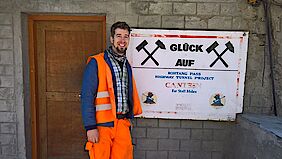 What is Global Surveyor's Day?

This first Global Surveyor's Day took place in 2018 and was marked at the World Bank Land and Poverty Conference in Washington DC. Recognised as the world’s oldest legal profession, surveying has been an essential foundation in civilisation's development. In fact, the roots of surveying can be traced back to Ancient Egypt, when so-called "rope stretchers" used ropes calibrated with knots to measure the land in order to mark boundaries. Ever since, surveyors have been exploring the unknown on land, in water and in space and thus pioneering discovery. On 22nd March 2013, representatives from NSPS and CLGE signed a declaration to create a common worldwide event to remember those innovators, but moreover, to raise awareness of the vital contribution the surveying profession makes to our communities.

Benedikt Wolters agrees that the work of surveyors is often undervalued or overlooked in our society. "Unfortunately, one of the biggest challenges for me is bringing an understanding of surveying to the masses. In many areas of my work, it is not uncommon to be asked, 'Do we need this?' Often I see it as my task to fight for the prestige of surveying."

On this occasion, Global Surveyor’s Day 2019, we wanted to know:

Who do you consider to be a pioneer in the field of surveying and how have they made an impact?

"In the origin of surveying, I would have to say Carl Friedrich Gauss with his fundamental contributions to national surveying and astronomy," says Karsten Zimmermann. Born in 1777, Gauss is more famously known as a mathematician, however, from around 1817 he turned his attention to studies in geodesy and his research resulted in several important advances in the measurement of curved surfaces. For more information, Karsten's tip: "Read the book 'Measuring the World' and you’ll know why!" This 2005 bestseller by author Daniel Kehlmann, re-imagines the lives of Gauss and Alexander von Humboldt on their mission to measure the world.

Another example of the link between mathematics and surveying is Pythagoras. "Back in about 500 B.C. he was already claiming that the earth must be spherical, contrary to the common idea of the time, that the earth was a disk," explains Benedikt. Nowadays, the Pythagorean Theorem plays a huge role in surveying as it is the most important tool in triangulation.

That said, obviously surveying methods have evolved since then. We asked our surveyors:

What have been the biggest changes in surveying during your career at DMT?

"The developments in satellite-based radar remote sensing, digital photogrammetry and developments in integrated geoinformation systems are certainly worth mentioning here," says Karsten. "In a geo-data infrastructure, the information obtained from this now forms the essential basic data, which, together with a multitude of other geo-based information, provides the basis for the digital society." Although such developments are exciting, they also bring new challenges for those working in the industry. "We always have to stay up to date in terms of new measuring methods and techniques and try to actively help shape them at one point or another. Whether tunnel construction, track construction, modern building construction or civil engineering - today's engineering geodesists are faced with a wide variety of tasks and always have new challenges to overcome."

"Another significant development is certainly the ever-increasing integration of various data and the associated data flow. Today, it is often no longer enough to have a minimum amount of data, but to generate maximum output from various data sources," adds Benedikt, whose job as a surveyor has taken him all over the world. Within the DMT Group there are many opportunities to travel and collaborate on projects with colleagues from other countries and backgrounds. Benedikt recalls fondly one of the highlights of his work so far: a mission in the Himalayas in Northern India, where he supported Indian surveyors in a major project at an altitude of approx. 3000m. "The landscape with a view of the surrounding six thousand meter peaks, working at unfamiliar heights and the completely different culture have fascinated me forever," he says.

So, what does the future hold for the surveying industry?

With Industry 4.0 and digitalisation now at the forefront of so many business sectors, modern technology is having an influence here, too. That doesn’t mean, though, that classical surveying methods are likely to become obsolete. "On the one hand, the same methods will continue to be used in many fields of surveying, but with state-of-the-art technology," explains Benedikt. "On the other hand, further methods that originate from the diversity of surveying are being developed and researched. An interesting and exciting field for me will be the combination of surveying and augmented reality, suitable for mass application." Whereas Karsten believes, "Surveying will be immensely influenced by digitalisation in the areas of data acquisition and evaluation in the future. Increasingly large amounts of information will be available from increasingly automated measurement procedures and these will have to be filtered, processed and evaluated using intelligent evaluation systems."

Find out more about our surveying services: https://www.dmt-group.com/services/exploration/surveying-geoinformation.html