The Essen based company DMT GmbH & Co. KG has combined its competences in the fields of measuring, assessing, modelling and predicting ground motion to found its own Expert Body for Ground Movement. This new body will be managed by Dr.-Ing Karsten Zimmermann, who was officially appointed as an expert witness for mining related subsidence according to German industrial classification §36 GewO and sworn in by the Arnsberg district government on 16.12.2013. 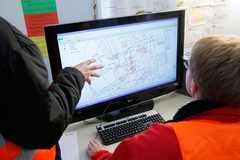 On top of decades of experience in the field of calculating, measuring and evaluating ground movement, DMT operates monitoring networks worldwide and acts as an independent expert witness for authorities, private individuals and customers from industries such as mining and tunnel building, civil engineering and infrastructure.

The current subsidence caused by abandoned mine workings at Essen Railway Station, where DMT's experts have been entrusted with the task of inspecting and remediating the danger zones, is just one example of the kind of ground movement DMT deals with. “It’s not always man and machine, however, that are to blame”, explains Zimmermann. “Natural factors, such as landslides or geologically influenced ground movement can also give rise to subsidence risks.”

As well as the traditional fields of application in mining and tunnel building, DMT offers specialist services such as subsidence prediction, interferometric radar techniques, laser scanning and GNSS offshore applications, even in areas prone to explosion hazards.

Damage prevention is a significant aspect of the experts' work. Wherever there's an acute or potential danger lurking under the surface, it's their job to get to the bottom of the problem by determining any ground movement and deformation and what risk, if any, this poses to nearby people or property.