Essen, Germany, 16.04.2014. The University of Leoben, Austria's university for mining, metallurgy and materials, has conferred an honorary professorship on Dr Bodo Lehmann, head of the Exploration & Geosurvey division at DMT GmbH & Co. KG. The award ceremony took place on 4 April 2014 in the university's Erzherzog Johann Auditorium. 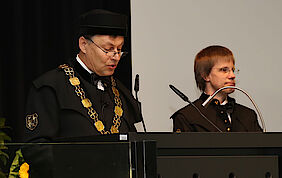 Lehmann, who has been lecturing at several universities since 1996, was first contracted by Leoben in 2006. This year the assistant lecturer for applied geophysics also took over the obligatory lecture "Engineering Geophysics" at the mining university, where he achieved habilitation in 2010.

Lehmann has over 25 years of professional experience in his field. On the strength of his previous research and work performance, he was appointed as head of the Exploration & Geosurvey division at DMT in 2009 and is a managing director of the Czech subsidiary DMT-Geosur-vey spol. s r.o. and DMT Petrologic GmbH in Hanover.

Additionally, as a board member of the German Society for Geophysics and member of multiple international working groups, he has long been concerned with researching, teaching and putting to practical use geo-physical know-how for the exploration of natural resources and ground surveying.