Despite adverse weather conditions, the Essen based firm DMT GmbH & Co. KG completed its 3D seismic exploration of conventional natural gas in the Northern Spanish region of Rioja on schedule in March 2013. In the course of the three-month long investigation, the experts had to "manage" the challenging topography in particular in terms of the vineyards that dominate the area’s cultivated landscape. It was not by chance that the project was christened Viura 2012/13, taking its name from one of the region's white grape varieties. 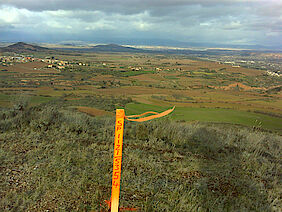 The project was contracted by UFGEP (Unión Fenosa Gas Exploración y Producción S.A.U.), one of the largest Spanish gas service providers, and its partners Sociedad de Hidrocarburos de Euskadi, S.A. and Oil & Gas Skills, S.A. Over an area of 232 km², containing the district capital Logroño and further 22 municipalities, countless measures needed to be coordinated even before exploration began. Authorisation had to be granted for around 60,000 plots of land, 90 % of which are privately owned, and dates had to be agreed for the 3D seismic work to be carried out.
"The fact that the whole project was executed according to plan, without any accidents or adverse environmental effect despite the most difficult conditions severely impressed us", said Luis Carmona, Viura Project Director at UFGEP. In their letter of thanks, the contractors particularly praised the efficient coordination of all aspects of DMT's services (HSE, quality, planning and budget).
The work was performed from January to March 2013 when "sunny Spain" certainly wasn't at its best. This was one of the wettest and snowiest winters of the last decade, which made the field work even more difficult than expected. However, seismic waves were produced at nearly 10,000 locations using specialist vehicles and borehole methods and were logged at approx. 9,000 points.
A total of 38,520 working hours were needed and 187,248 kilometres were covered by 56 vehicles in order to gather and record the seismic data, which will provide UFGEP with precise and reliable information for future activities in the area.
The successful realisation of the Viura 2012/2013 project should help reinforce DMT's presence in the South Western European markets.