The Essen-based exploration and engineering company DMT was contracted by the Canadian oil and gas producer, Vermilion Energy Inc. to carry out a seismic exploration survey in the Netherlands. The field work is now underway. 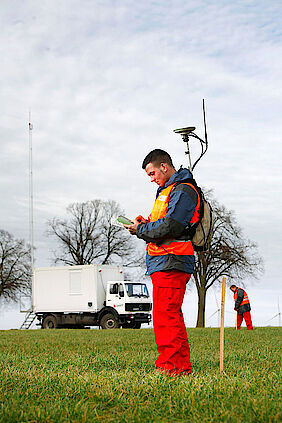 Surveying of source and receiver points

The underground exploration project will use the 3D shot seismic method and be carried out in two parts: From August to November 2017 DMT will perform seismic surveying in southern Frisia, including Akkrum, and between August and December 2018 the survey is planned to continue in the South and Southwest of Friesland. The first stage will cover a total area of around 315 km² and require approximately 10,000 shot points. This project is the first major seismic survey to be carried out in the Netherlands in over 10 years.

"We are operating within an extremely sensitive natural ecosystem and are therefore working in very close cooperation with conservationists and the relevant permit authorities," explains DMT-Project Manager Dr Rüdiger Misiek. "A further challenge is negotiating the extremely varied terrain, sump and moorland, with numerous ditches that need to be bypassed, as well as the quaint Dutch towns such as Drachten, with its densely built-up narrow alleys and "shared space" approach to traffic regulation.