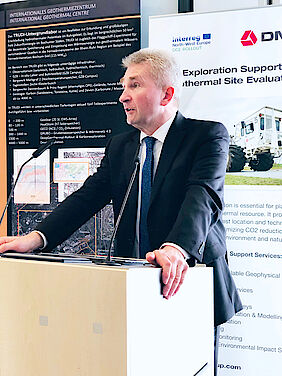 For over 20 years DMT has been exploring geothermal deposits in Germany and Europe (Netherlands, Belgium, France, Austria, Denmark, Liechtenstein, Switzerland). Our customers are mostly municipal or regional energy supply companies and industrial companies that are planning a geothermal power plant and need support in exploring and evaluating the location of their "DEEP" geothermal deposits.

As part of the Interreg project, DMT is taking on the task of exploring geothermally relevant and promising rock strata and structures that exist in NRW at depths of several kilometres, thereby making them usable for supplying heat to the population. Together with the Geological Service of NRW, the existing geo data of the subsoil will be evaluated, combined in a 'Geological Atlas' and a computer simulation of the geothermal potential at the pilot sites in NRW will be created as a planning basis for the construction of geothermal power plants.

In addition, DMT will support the Geothermal Centre Bochum (GZB) in setting up a geothermal exhibition at the Bergbau Museum (DBM) in Bochum by installing a publicly accessible online seismological observation station in order to provide interested citizens with an information platform on the use of geothermal energy in NRW.