Essen, Germany, 5 May 2015. DMT CoreScan UV is being launched in Canada as a new additional UV fluorescence imaging tool for the established DMT CoreScan System. Using this integrated feature makes it easier to analyse drill core e.g. for the distribution of fluorescent hydrocarbons or minerals such as scheelite and halite (salt). This kind of core analysis is also a routine operation in the field of oil and gas exploration. 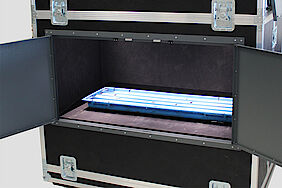 While the DMT CoreScan3 generates unique 360° or planar images of drill core or core boxes under white light, the DMT CoreScan UV produces images of core or core boxes using both UV and white light. Its carefully developed and designed setup allows images of the UV fluorescence in the highest quality without disturbing artefacts under weak fluorescence. Maximum image dimensions of the UV supplement and the standard CoreScan system are identical. Core up to a length of 1.05 m and core boxes up to 1.15 x 0.64 m are scanned in a single image within seconds.

Images of the CoreScan UV are then imported to the analysing software / database DMT CoreBase2, developed to analyse, manage and organize scanned images and store the data in a digital drill-core library. Furthermore, users may export all core or well-related data to other software solutions e.g. 3D modelling and interpretation software.

The new tool, which is on show at the GeoConvention in Calgary from 4th to 6th May, fills a gap in the market for a professional UV core scanning device. Jens Wiegand, manager of the DMT CoreScan system explains “several companies who were working with self-made solutions approached us and asked if DMT would be interested in designing a CoreScan product for this specific purpose”. As a result of the frequent requests, DMT, who themselves have been active in natural resources exploration for decades, collaborated with a number of their clients in the oil industry to design a scanning tool that can either be integrated or operated as a standalone device. “Even older CoreScan3 systems can be easily upgraded with the new CoreScan UV” adds Wiegand.

Because of its small dimensions and weight, the DMT CoreScan UV can be transported easily, yet is robust enough for the often harsh conditions on site. Furthermore, the DMT CoreScan technique offers a particularly high production rate owing to its fast scanning process, easy handling and advanced safety features avoiding damage of the drill core.