Getting excellent data four times faster than with conventional methods, while still protecting the environment: Using a combination of wireless seismic technology and slip sweep methods that is unique in Europe, DMT has investigated a total area of 1,484 square kilometres in Lower Austria over the past three years. The contract was awarded by the two Austrian companies OMV and Wien Energie. Their aim was to explore the underground in order to develop and harness domestic deposits of natural gas, crude oil and geothermal energy. 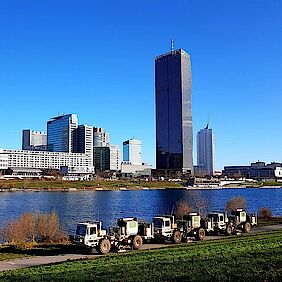 3D seismic survey Schönkirchen in the immediate vicinity of Vienna, for the exploration of geoenergy resources

The project was a race against time: from December 2017 - March 2018 and October 2018 - March 2019, DMT performed the seismic survey in the area of the Vienna Basin, which stretches from the northeast of Vienna to the Slovakian border. Commissioned by the Austrian oil and gas group OMV and Wien Energie, Austria's largest energy supplier, the project initially started with 580 square kilometres to be investigated and then grew to around 1,484 square kilometres by March 2019. "The aim of the project is to develop the domestic energy resources together with Wien Energie and make them usable. OMV is interested in the natural gas deposits," explains Christian Prodinger, project manager at OMV.

A challenging task for the international engineering service provider DMT: "Nature left us extremely little time for the investigation," explains project manager Dr. Rüdiger Misiek. "Every April, the breeding and nesting season begins, and the farmers need free passage for sowing and harvesting. Misiek and his team therefore only had a few months to carry out the seismic survey.

They managed it within the timeframe, above all, because DMT combined two technologies: the slip sweep method and wireless seismic technology. "So far, this combination has never been used in Europe. The concession areas here are generally too small," Misiek explains.

With the slip sweep method, several pulse generator vehicles, so-called vibrotrucks, send sound-wave-like oscillations into the ground at set intervals of time and space. The vibrations are reflected at a depth of several kilometres by rock formations and are then captured and measured at the earth's surface by 32,893 wireless transducer stations with up to 543,000 geophones. A total of 12 vibrotrucks drove in four groups at a distance of 400 meters apart and transmitted vibrations into the underground with a 65 second time-shift. "In this way, we can achieve up to 180 sweeps per hour. That's four times the quantity and speed of a conventional method," Misiek explains.

But it's not just the speed of this combination that impressed Misiek: "In the past, we had to lay cables across the entire landscape for such surveys. This meant an encroachment on nature and the environment". By using wireless seismic stations, the seismic survey now leaves hardly any traces. "The method is ideal for processing large areas in an environmentally friendly manner in a short period of time. And the quality of the data is excellent," says Misiek.

OMV is also satisfied with its engineering service provider: "The entire DMT team made a professional and experienced impression and created a partnership-like cooperation. A good experience for us," says Christian Prodinger of OMV.

The data is currently being prepared by DMT. Once it has been processed by OMV and Wien Energie, a 3D image is created that can be interpreted by the experts. "Based on this data, if our specialists suspect there to be energy deposits, we can start drilling in about two years' time to tap the potential," says Prodinger.